The Mars Science Laboratory (MSL) is one of the most spectacular planetary missions ever. This picture was NASA Image of the Day on 15 June 2011. It shows the Curiosity rover that the MSL mission will put on the surface of Mars. Visit the MSL homepage for details (includes a countdown clock to the landing in August 2012). 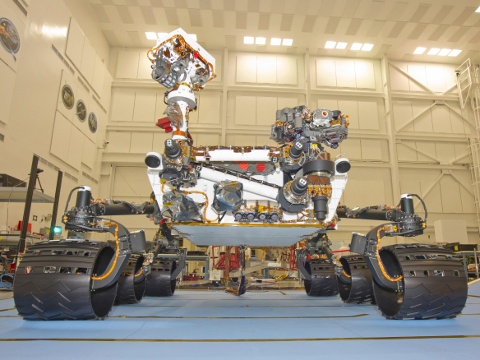 I know, I know, you’ve seen quite some Mars rovers lately. But this is a big one, the size of a car. This mission might even be cooler than the venerable Viking missions from 1976. The difficulty with the MSL mission is not the rover aspect itself, which seems to be under control after the successful missions of the last years (Sojourner, Spirit, and Opportunity), it’s the sheer size of it. The rover weighs 900 kilograms (2000 pounds). This means that it is no longer possible to do a soft landing using only parachutes and airbags, as the previous rover missions did. After an initial slowdown using parachutes, a rocket powered “sky crane” takes over and gently lowers the rover onto the surface of the planet! I’m really looking forward to this mission! Although I still think that the Russian Venera (Венера in Cyrillic, which is Russian for Venus) missions will be very difficult to surpass on the awesomeness front. Think about it, together these missions put no less than ten landers on the surface of Venus, where the temperature is more than 450 °C (lead melts at 327 °C), and the pressure is 90 times that on Earth. And all of that starting in 1970…