The perfect camera is diffraction limited. This article is written strictly from an optical point of view, so don’t expect a Nikon / Canon / Leica comparison here… Optically, a camera (or telescope or other optical instrument) can be described by its point spread function (PSF), which combines the optical characteristics of any mirrors, lenses, sensors, etc. that it contains. The point spread function is another name, typically used in image processing, for the impulse response of a system. It describes how the system images a point source. The point spread function is relatively easy to determine in astrophotography. Since stars are essentially point sources, each individual star gets imaged as the PSF of the camera / telescope combination.

A “perfect” camera should have a PSF that is a single point. In practice, most optical systems typically contain imperfections, which result in aberrations in the image. A typical example of this is chromatic aberration, caused by light of different frequencies (colors) being refracted differently by a lens. A “perfect” system, however, which does not have any imperfections that cause aberrations, cannot escape the effects of diffraction. Diffraction is a basic physical effect that is caused by the interaction of light waves with objects. It cannot be avoided, which is why optically perfect systems are called diffraction limited.

The classical approach for determining how diffraction limits the resolution of a camera is the Airy pattern, which is the theoretical PSF of a circular aperture. The Airy pattern is named after Sir George Biddell Airy (1801–1892), an English mathematician and astronomer. It is given by

where \(I_0\) is the intensity in the center of the pattern and \(J_1\) is the Bessel function of the first kind of order 1. The variable \(x\) is defined by

where \(\lambda\) is the wavelength of the light, \(r\) is the radial distance from the center of the image, and \(N\) is the f-number of the camera. Below is an example of an Airy pattern. 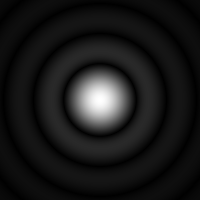 In the follow-up article The PSF of a Pinhole Camera, I work out the PSF of my pinhole camera. To do that, I had to use at least Fresnel diffraction, since the Airy pattern is based on Fraunhofer diffraction, which is an approximation that isn’t valid for the close distance between the detector and the pinhole of my camera. In the end, I have used the full Rayleigh–Sommerfeld diffraction integral.