There's Only One Parabola

There is really only one circle. Of course, you have to allow for translation and scaling for this to be true, but I think you’ll agree that a large circle is essentially the same as a small one. The geometrical term for this is similarity. Two objects are similar if they can be transformed into each other using only (uniform) scaling, translation, rotation, and reflection. This means that, for example, all squares are similar, but all ellipses are not. Figure 1 illustrates this with two circles and two ellipses. You can translate the circles so that they have the same center and then scale them to be the same size. The ellipses, however, can be translated and rotated, but the narrow ellipse cannot be scaled onto the wide one. 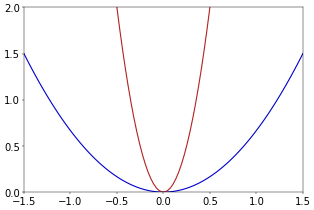 The formulas for the two parabolas are

for the red one and

for the blue one. If all parabolas are similar, then that means that there exists a uniform scaling of the red parabola that puts it on top of the blue one. This scaling is

This is because applying the scaling to

Hence, there’s only one parabola, in the sense that each parabola is a larger or smaller version of each other parabola (after rotation and translation).