Cherenkov radiation is best know for the eerie blue glow in the water around the core of nuclear reactors. Figure 1 is an example from the Advanced Test Reactor at the Idaho National Laboratory, Idaho, US. 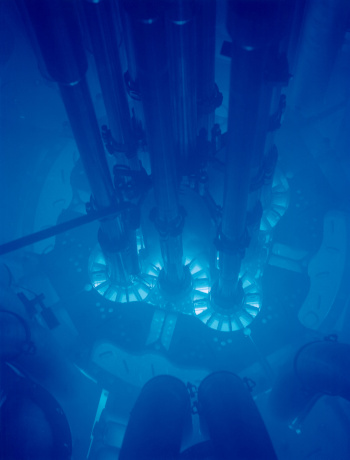 Cherenkov ratiation was named after the Russian scientist Pavel Cherenkov (Павел Черенков in Cyrillic), who received the 1958 Nobel Prize in Physics for its discovery, together with Ilya Frank and Igor Tamm. It is caused by particles moving faster than light.

Cherenkov radiation is caused by charged particles (often electrons) entering a dielectric material (let’s not go into details for now) at a speed that is larger than the speed of light in that material, which is, of course, perfectly possible. The radiation consists of photons with a continuous spectrum that is mostly in the ultraviolet, so only the lowest frequencies are visible to the human eye.

This seemingly exotic phenomenon has quite a few applications. It is used to detect cosmic rays, check the level of remaining radiation in spent nuclear fuel, detect certain radioactive isotopes (e.g., for imaging in in biology or medicine), and others.

For me, one of the coolest applications is the detection of cosmic rays through big water tanks with sensitive light detectors that “catch” the charged particles that their decay produces. A spectactular example of this is the High Altitude Water Cherenkov (HAWC) observatory (Figure 2) in Mexico. This observatory consists of 300 tanks of over 7 m high, each holding 188000 liters of water. Because there are many separate tanks, the observatory can determine the direction of an incoming cosmic ray by looking at the difference in time of arrival of the decay particles.

Anyway, for some reason, I find Cherenkov radiation really fascinating. If I would be the kind of person that makes a bucket list, seeing Cherenkov radiation with my own eys, like in Figure 1, would be on it in a prominent position! It seems unlikely, however, that I’ll ever get the chance…