How to Record a Lion in a Concert Hall

Now, I know that you can just use any standard audio software and tell it to add a large concert hall effect or something, but that doesn’t tell you how it’s done, which is where I come in. 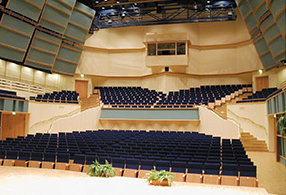 The necessary concept to compute how this lion would sound in a given concert hall, is the impulse response of that concert hall. Impulse response is a concept from signal processing (including image processing, where it is often called point spread function). A linear, time-invariant (LTI) system, is characterized completely by its impulse response. This is quite technical, but assuming that your system is LTI makes your “signal processing life” a lot easier. Practical systems are often assumed to be LTI, even though this is never exactly true. I’ll explain all this in more detail in a future article.

The sound below is the impulse response of the Promenadikeskus concert hall in Pori, Finland. It is maybe a bit unexpected that you can actually hear the impulse response as an actual sound, since the original impulse is a theoretical construct that you cannot hear (to begin with, it has a duration of zero). Also, this impulse response is not recorded by producing an approximate impulse and recording the result, it’s more complicated than that. I’ll also explain that in more detail in a future article.

Combining a sound with the impulse response of something (a concert hall, an amplifier, etc.) is done by means of convolution, if the system is LTI. Convolution is so common in image and signal processing that it almost seems the third basic arithmetic operation there, next to addition and multiplication. This article focuses on digital signal processing, so I’ll define convolution using sums instead of integrals. The convolution of two signals is defined (in the one-dimensional case) by an infinite sum,

Often, \(x\) is the original signal (an audio stream, a radio signal, etc.), and \(y\) represents some manipulation of that signal. In this definition, \(x[n]\) and \(y[n]\) are sequences of numbers that are a sampled version of the real signal. Computing a convolution by following this definition closely is a very expensive operation (in terms of computation). However, the ubiquitous use of convolution is enabled in practice by the Fast Fourier Transform (FFT) algorithm. In practice, the length of \(x\) and \(y\) is of course not infinite, and the sum simply means that each point of each signal is combined with each point of the other signal. When the lion growl is convolved with the impulse response of the concert hall, the result is the following.

With this convolution, we have determined exactly how the lion will sound in the Promenadikeskus concert hall, and no one got hurt. As you would expect from a large concert hall, the sound takes a long time to “die out”. This also follows from the definition of convolution, since the combination of a 1 s (1 second) signal with a 4 s signal must result in a 5 s signal (each sample of \(x\) is spread out over 4 s by the sum over all \(m\)). In the impulse response itself, only the initial “click” is audible, but the remainder does influence the rest of the lion growl, which is audible for almost the full 5 s.

Sources: The impulse response of the concert hall is courtesy of the Laboratory of Acoustics and Audio Signal Processing, Helsinki University of Technology (see Concert Hall Impulse Responses on their website). The lion growl is from freeSFX.co.uk.

thanks for getting me started on convolution. My teacher is building on the math rigor of LTI systems for the past 3 weeks and by the time, we started studying convolution, i was lost. back on track again :)

That is an excellent article. Thank you