The Mandelbrot set is named after Benoît Mandelbrot, a French American mathematician. The illustration below was created with Fractint, an ancient (1988!) but still maintained program that can create all sorts of fractals (the colors are from a palette called “goodega”, which was meant to work well on EGA displays, how ’bout that?). 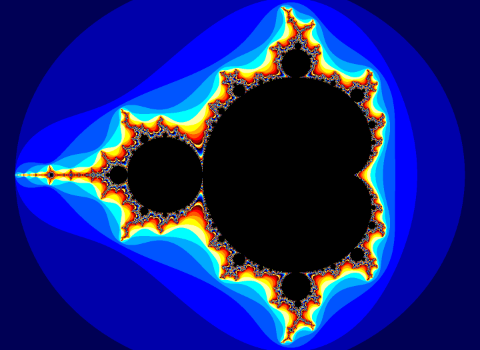 The set is a part of the complex plane. It is created by iterating the simple complex quadratic polynomial \(f_c:\mathbb{C}\to \mathbb{C}\), defined by

The Mandelbrot set is a fractal, probably by far the best known one. The typical (although not mathematically rigorous) example of a fractal is a coastline. If you measure the length of the coastline of, say, Norway, using a ruler of 1 km long, you get a certain length. But if you replace the ruler by a 1 m one, you get a larger length, since you are able to follow the actual shape of the coastline more closely. This is not true if you measure a football field (or Colorado). The structure of a coastline looks the same (or at least similar) at different scales. A mathematical object that has this property of self-similarity is called a fractal. The detail of the Mandelbrot set in the following figure shows that (distorted) copies of the main shape occur again at smaller scales. In fact, the shape occurs infinitely often. 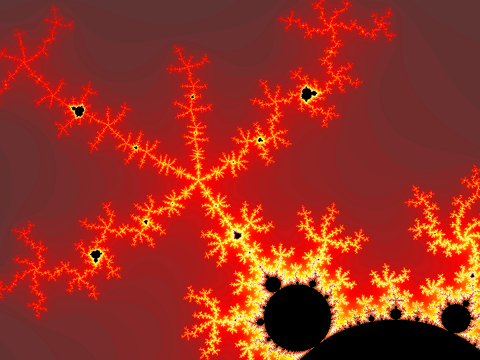 Despite the pretty colors, the object of interest is not the colorful part of these images. The Mandelbrot set is represented by the black parts. If only the Mandelbrot set itself is shown, the image above becomes: 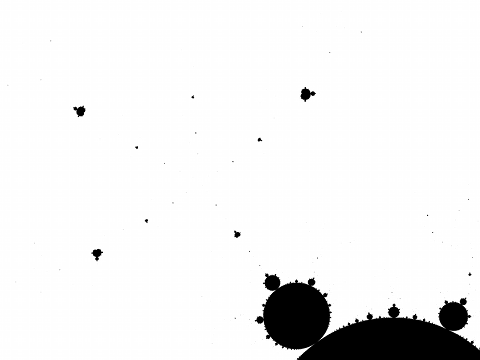 Only the small copies of the Mandelbrot set are visible, and even then the smaller ones only because I downsampled the image from a higher resolution one. Now, amazingly, the Mandelbrot set is actually connected! This means, intuitively, that it is a single object (or, mathematically, that it is not the union of two or more disjoint open sets). The fact that the thin filaments that connect the different parts of the set cannot be seen in the above figure is not due to an error in the software. Indeed, the software renders a picture of the set on a pixel grid by calculating a value for the middle of each pixel, and the filaments are much too thin to be picked up that way.

The Mandel program by Wolf Jung includes several different algorithms to visualize the filaments. The difference with the classical approach is that Mandel attempts to select each pixel that contains a point of the set anywhere in the pixel. The effect is that the filaments are shown (much) too wide, but that it becomes possible to visualize them without resorting to using colors in the neighborhood of the set (keeping all the attention to the Mandelbrot set itself, instead of wooing everyone with the pretty pictures). 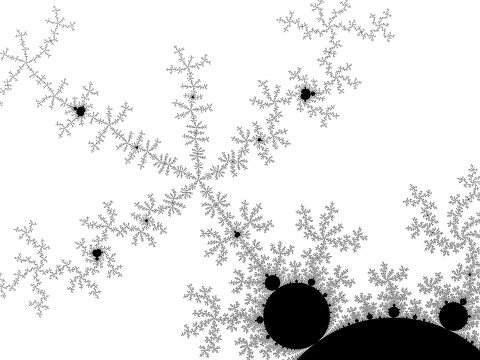 Anyway, it has always been a pet peeve of mine that people only look at the pretty colors, not realizing that the colored pixels are not even in the set, since the colors are typically used to indicate how quickly the iteration for that pixel escaped to infinity!

Indeed, I seem to have skipped a value… Thanks for pointing this out; I’ve adapted the table!