I normally don’t promote external sites or apps on this blog, but I’ve found an app that every nerd needs (I assume here for a moment that you, my reader, might just as well be one). You need to have Phyphox (phyphox.org) on your phone! I need to thank my daughter’s high school physics teacher (thank you, Mr. Geens) for using it in class, because that’s how I found out about it…

What Phyphox does is, in principle, simple. It provides access to the raw data of the impressive range of sensors that is available in modern smartphones. It then goes on and uses this data to provide all kinds of physics experiments, but, personally, I mostly like it for the sensor data access. I’m sure that the possibilities and accuracy depend on the brand and type of phone, but even “simple” smartphones have loads of sensors these days.

The sections below illustrate some of my personal favorites. However, do have a look for yourself. 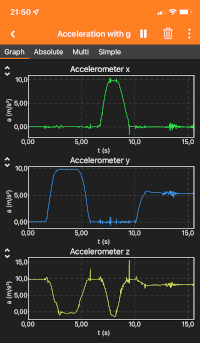 Acceleration with g reads out the raw values of the accelerometer of your phone and shows them, or plots them in a graph. The with g simply means that no correction for gravity has been made, since that is typically the dominant acceleration that your phone experiences at any given time (unless you drop it, are a fighter pilot, or are in a car crash or something). There’s also Acceleration (without g) where the effect of gravity has been removed. But the raw output of the sensor includes it, of course.

The raw acceleration graphs (in the x, y, and z direction) are a reminder (to me, at least) that, because of special relativity, acceleration as caused by gravity cannot be distinguished from acceleration as caused by movement. The classical illustration is the following. If you are in a closed elevator and you measure an acceleration of 1 g, then you cannot know from that whether you are stationary on Earth, or in deep space being accelerated by someone pushing the elevator with a force that results in an acceleration of 1 g. As Einstein put it “the effects of being in a gravitational field are indistinguishable from the effects of being in an accelerated frame of reference”. If you put a horizontal laser in one wall of your elevator and follow the path of the beam, then you’ll see that it is curved, because of the constant acceleration of the elevator. This is obviously a thought experiment, but the effect is real. Einstein used this thought experiment to decide that a gravitational field has to bend light for the acceleration caused by it to be indistinguishable from that caused by an accelerated frame of reference.

Acoustic Stopwatch starts and stops a timer using sound. For example, snap your fingers, wait a little while, and snap them again. This obviously uses the microphone of your phone, but it is more an aid to do experiments than a raw sensor reading, of course. One use is to attach a weight to an inflated balloon hanging in a ring, and make the balloon pop. The acoustic stopwatch can then measure the time between the popping sound and the sound of the weight hitting the table, and so measure the exact duration of the fall.

If your phone has a magnetic compass, in the sense that it can display a virtual compass with a needle that points to magnetic north, then it probably contains a fully three dimensional magnetometer. A (three-axis) magnetometer measures the magnetic field in the x, y, and z direction.

Phyphox can show the output of the magnetometer of your phone in the same kind of plot as for the Acceleration with g shown above. However, it can also do something really cool with it. It can compute a live magnetic spectrum. On my particular phone, it samples the magnetometer at a rate of 100 Hz, so that it can show frequency content of up to 50 Hz. This is not really useful when you want to find magnetic north, but if you put your phone next to a power cable, then you can see whether a current is flowing through it or not. Here in Europe, the alternating current (AC) typically has a frequency of 50 Hz. That’s at the limit of the spectrum, but the peak still clearly shifts from DC to about 50 Hz when I turn on my desk lamp. I think it is really cool that you can do things like that with a normal smartphone.

These are just a few examples, but there are many more things to play with. Anyway, why are you still here? Head over to phyphox.org and install the thing already!