There’s a truly cool deep space mission that I need to bring to your attention: Rosetta. Visit ESA’s Rosetta page for details.

Rosetta is an ESA (European Space Agency) mission. It will be the first spacecraft that remains close to a comet for an extended period of time. It is also the first mission ever that will have a lander perform a controlled touchdown on the nucleus of a comet (using a lander that will separate from the main spacecraft). This is an artist’s impression of the Rosetta spacecraft and the Philae lander at the comet: 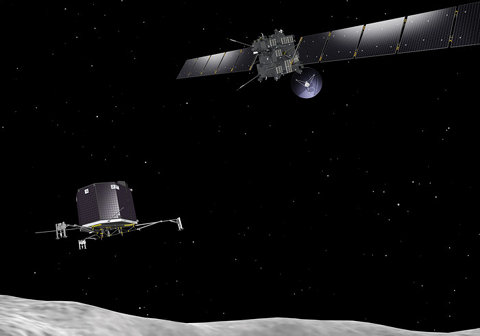 The main scientific part of the mission is about to start, since Rosetta is getting quite close to its target comet, 67P/Churyumov-Gerasimenko. It will start mapping the surface of the comet in August 2014, attempt landing Philae in November 2014, and stay with the comet all the way through its closest approach to the Sun. The mission will end in December 2015.

The journey of Rosetta so far is just fascinating. Rosetta was launched back in 2004 and has been travelling towards the comet ever since. As most deep space missions, it had to use a trajectory with several gravity assists (or gravitational slingshots). The following ESA video nicely shows the complicated path that the spacecraft has followed over the past ten years. (If you are viewing this site over https, the embedded video might not show up in your browser, because ESA doesn’t provide a true https version of it. Access the http version.)

Also check out the really nice interactive version of this video: Where is Rosetta?.

With the final orbit correction maneuvers happening around this time, now is a good moment to start following the Rosetta mission closely!