The Radio Meteor Signal Path from Transmitter to Spectrogram, Part 2

This is part two of an article that describes the signal path of a radio meteor (also read part one and part three).

Combination with the Directly Received Signal at the Antenna 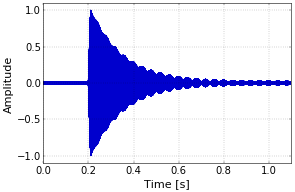 If we write the amplitude of the directly received signal as \(D\), the Doppler offset as \(f_D\), and reiterate from part one the notation of \(f_T\) for the transmitter frequency and \(A(t)\) for the amplitude modulation caused by the reflection off the trail, then the combined signal \(s_C(t)\) can be written as

Effect of the Receiver

The signal of Figure 1 is the input of the receiver. Since the effect of the receiver is to frequency down convert the signal to a center frequency of about 1 kHz, we have to look at the signal in frequency space (Figure 2). For the simulation that produces these figures, I’ve used a transmitter frequency of 100 kHz instead of 49970000 Hz to reduce the running time of the simulation. This is completely equivalent, since the down conversion step is independent of the frequency. Figure 2 only shows a small region around 100 kHz. The small peak in the middle of the figure is the directly received signal. The reflected signal peaks at a 25 Hz higher frequency (this is the Doppler offset), and also causes the side lobes. 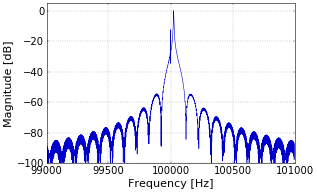 Note that this multiplication of signals is completely different from what happens at the antenna, where two signals are added. Moreover, the offset of the LO is on purpose. The effect of mixing the received signal with an LO that is offset is that the frequency contents of the meteor reflection is down converted, i.e., its frequencies are shifted from its original frequencies around \(f_T+f_D\) to a range of frequencies around 1 kHz.

from the well-know product-to-sum trigonometric identities. This means that, for an ideal mixer, the result of mixing is a first frequency component at the difference \(f_1-f_2\) and a second frequency component at the sum \(f_1+f_2\) of the original frequencies. The result of the mixing operation is shown in Figure 3, again for a transmitter frequency of 100 kHz. For this frequency, the two components are at 1 kHz and 199 kHz. 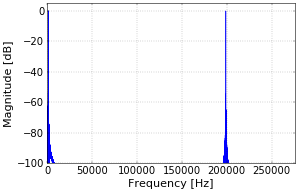 To illustrate that the two components are indeed copies of the original spectrum, Figure 4 shows a detail of the spectrum from Figure 3, centered at 1 kHz. 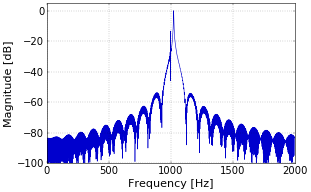 The next step is sampling, followed by the generation of spectrograms instead of spectra. This is covered in part three of this article.