The Wow! Signal, Still a Mystery After 37 Years

The famous “Wow!” signal is a radio signal that was received on 15 August 1977 by the Big Ear radio telescope of The Ohio State University, as part of the SETI (Search for ExtraTerrestrial Intelligence) program. After all these years, it is still the most tantalizing candidate for being a true interstellar signal. Its name comes from the manually written word “Wow!” on a computer printout, and I’ll treat it here as an example of real-life signal analysis. 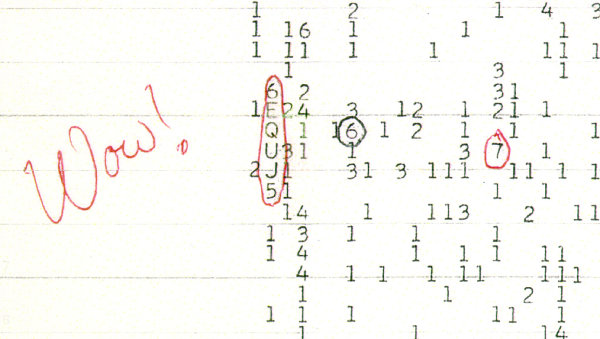 With the currently available computing and storage capacity, the complete signal would be stored. Maybe everything would not be stored indefinitely, but the raw data of spectacular events like this one would surely be available in full. With the computers of 1977, only the average signal strength over the first 10 of each period of 12 seconds was recorded. The computer needed the last two seconds of each period for processing. The average signal strength, for each of the 50 frequency channels, was then not stored on disk, but printed on paper. For every 12 seconds, a single character was printed for each channel, and the illustration in Figure 1 is a small part of the printout with the famous “Wow!” annotation. The characters in the printout represent the signal strength above the background level. Hence, the meaning of the string “6EQUJ5” directly corresponds to the signal-to-noise ratio (SNR) of the received signal. The letters correspond with SNR ratios in bins of size one centered around 6.5, 14.5, 26.5, 30.5, 19.5, and 5.5 (so, e.g., bin “6”, with center 6.5, holds SNRs between 6 and 7). Figure 2 shows a plot of the signal strength over time. 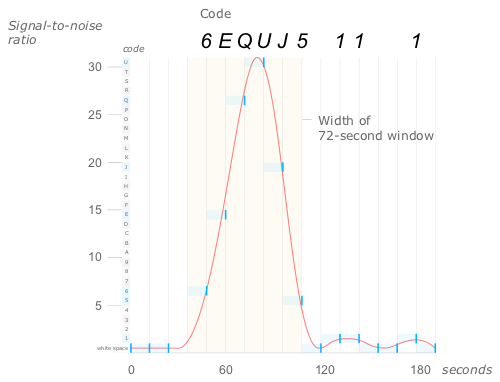 The six data points each represent 12 seconds, so the Wow! signal was recorded over a period of 72 seconds. Although the graph may suggest otherwise, the signal strength did not increase and decrease over this 72s period. It stayed constant and came in and out of “view” of the radio telescope that swept slowly across the sky. The power profile is an almost exact match for the antenna profile, which is one of the main indications that the signal is most probably celestial, since it would seem very unlikely that a terrestrial disturbance would exactly match the antenna profile of the telescope.

There is much more to say about the Wow! signal, and if you find this subject as fascinating as I do, I warmly recommend the fantastic 30th Anniversary Report by Jerry Ehman, the person who wrote the “Wow!” annotation on the printout. That report is not only a thorough overview of everything that is known about the signal, it is also a very nice demonstration of how the scientific method is supposed to be applied, even in the face of “spectacularness”. It is truly amazing how the full meaning of the string “6EQUJ5” is made crystal clear in the report.

Despite the misinformation that is regularly spread about it, the Wow! signal remains the strongest candidate for a true interstellar signal. It would be foolish to attribute it to alien intelligence too easily, since there is really no proof of that at all (and, as popularized by Carl Sagan, “extraordinary claims require extraordinary evidence”). But if it is of interstellar (but non-alien) origin, then it still doesn’t correspond with any known source or physical process. Hence, the mystery remains, even after more than 35 years.

I think it has most probably an alien origin, it is almost the simplest explanation of the signal. Unfortunately, given the space and time dimensions of our galaxy, changes are very low that we catch such a signal again soon...