Gravitational Waves, a New Observational Window on the Universe

Not that I am going to try, but it is difficult to underestimate the importance of the first detection of gravitational waves for physics. Apart from the fact that it is another gloriously successful test for general relativity, it actually opens up a new observational window on the universe.

If this sort of science news is your thing, you’ve already read about the discovery, so I’m not bringing you the news here. What I would like to do is to point out some of the the amazing technical properties of the project.

The accuracy of the measurement that was necessary to capture and characterize the signal that was detected, is close to unbelievable. The gravity waves were detected by measuring the change in length of the detector itself. The so-called LIGO detector, short for Laser Interferometer Gravitational-Wave Observatory is, as the name suggests, an optical interferometer. It is an L-shaped device, where each of the “arms” is 4 km long. Actually, there are two of those, one in Washington (state) and one in Louisiana, to be able to compare the measurements between the two and avoid false detections. 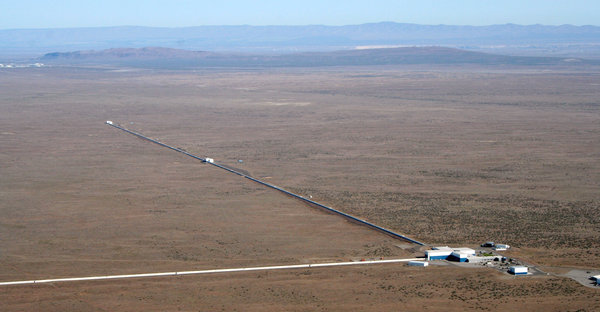 The principle behind an interferometer is very well known, and relatively simple. However, the gravitational waves that can be expected to arrive at Earth have a very low amplitude. To record them anyway, the LIGO detectors can detect relative changes in the length of the arms of \(10^{-22}\). To go from this relative accuracy to an actual length, we have to start from the original length of the path. The length of a LIGO arm is 4 km. This means that the detectable change in length is \(4\,\mathrm{km}/10^{22}=4\times10^{-19}\,\mathrm{m}\). This is actually about a 10000th of the width of a proton.

The maximum relative deviation that was measured for the gravitational wave event that was observed, is \(10^{-21}\). I state this here because some people use that as the basis for these kinds of comparisons, so that the distance to the nearest star would change by a whole hair’s breadth.

A Bag of Tricks

How did they do this? The technical details are many, but one of the main “tricks” is to lengthen the path by bouncing the laser between mirrors a number of times. About 280 times, to be precise. This means that the effective length becomes \(280\times 4\,\mathrm{km}=1120\,\mathrm{km}\). Since the actual change in length of the arm stays the same, this is a big help. But even with the artificial lengthening of the signal path, the experiment was only possible because of a truly enormous amount of technical development to compensate for all possible interference from outside. Examples of this are the use of sophisticated suspension systems, highly stable lasers, etc.

For more information, I’d like to point you to several great sources. You could start with the press release on the discovery, and then explore the nice LIGO site from there. There’s also the very intersting LIGO Magazine that talks more about the science, but also tells you about the people behind the science and how they experienced the events around the first detection. And there’s also the journal paper announcing the discovery, of course.