After mentioning Rosetta in June, there is another deep space mission that I want to bring to your attention. The final preparations for the flyby of Pluto by the New Horizons spacecraft have started. Visit NASA’s New Horizons page for details. 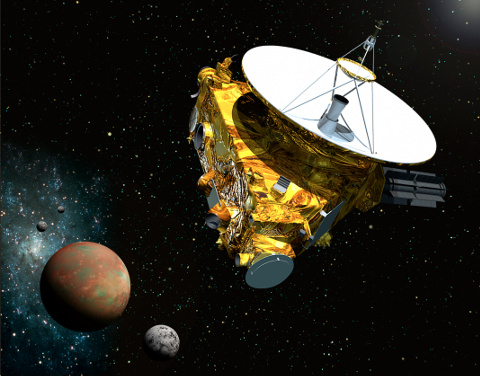 New Horizons will be the first spacecraft that visits Pluto. It was launched on 19 January 2006, when Pluto was still classified as a planet. It is now classified as a dwarf planet, after it was discovered that Pluto is actually part of the Kuiper belt. Pluto was the first of those to be discovered, but now over a thousand are known, and it is assumed that there might be hundreds of thousands of Kuiper belt objects with a diameter of more than 100 km alone. Hence, instead of visiting the last planet that was unexplored from close by, the New Horizons mission will now be the first to visit a Kuiper belt object.

On 6 December 2014, the spacecraft was brought out of its last hibernation period, and it is now undergoing preparations to start observations of Pluto and its moons on 15 January 2015. The closest approach to Pluto will be on 14 July 2015, but the fun starts earlier. By mid-May, the views of the Pluto system will be better than what the Hubble Space Telescope has provided up till now. Don’t forget to follow the news!