This is the first of four articles on tomography (also read the second one, the third one, and the fourth one).

Have you ever wondered how a CT (or CAT) scanner creates an image of the inside of a person? The answer is computing. CT and CAT are short for computed (axial) tomography. Computing is the secret sauce that is poured over the hundreds or thousands of X-ray photos that make up a CT scan, to merge them into a single image.

To create an image of the interior of a person or an object using tomography, you need two things:

In the context of tomography, the term projection has a very specific meaning. A projection in a given direction must be the sum of the density of the object in that direction (mathematically, it must be a line integral). Let’s follow an X-ray beam that hits a single detector pixel. The beam originates, at the other side of the object, from an X-ray source, a device that creates X-rays by accelerating electrons and colliding them with a metal target (the X-rays in CT scanners are not produced by radioactive decay).

On their journey through the object, some of the X-ray photons are absorbed. If the chance that a photon is absorbed in the first half of the object is 50%, then about half of the photons will make it through that first half. In the second half, the same thing happens: half of the photons are absorbed. Of course, since we started with only half of the original photons, only a quarter of those will be absorbed now, and the final quarter will make it all the way through. This means that photon absorption is an exponential process, and that a normal X-ray image is not a projection that is suitable for tomography.

Below is a (simulated) X-ray image of a box (a hollow cube) with a (solid) ball inside. The material of the box is a little less dense (it absorbes less photons) than the material of the ball. There is a hole in the ball for two-thirds of its length. The brightness of this image represents the number of photons that have reached the detector, and only photons that are not absorbed by objects in the scanner reach the detector. So, the sides of the box are the darkest part of the image, since they are the thickest. The front and back (together) also absorb some photons, so they appear as light gray. An area of pure white surrounds the box, since there is no object there, and all photons reach the detector. Again, this image is not suited for tomography, since it is not the sum of the intensity of the objects.

X-ray of box with ball

How to correct for this? The following formula describes the relation between the intensity \(I(s)\) of the X-ray beam and the density \(\mu(s)\) of the object, which are both dependent on the distance \(s\) traveled through the object.

Below is the projection image that was computed from the X-ray image above. The brightness in this image directly corresponds with the sum of the density of the objects, so this image is suitable for tomography. 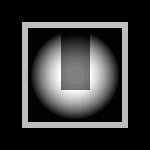 Projection of box with ball

The next article shows that it is possible to actually reconstruct a tomographic image from (lots of) projections like this.