This is the third of four articles on tomography (also read the first one, the second one, and the fourth one).

At the end of the second article, I left you with a very blurry reconstruction of the scanned object. Indeed, naive backprojection is not sufficient to create high-quality reconstructions. Why is that so?

Intuitively, a simple backprojection cannot be expected to create a perfect reconstruction, since the contribution of all smeared-back projections is positive everywhere. This means that even pixels outside of the object can get a positive value. Clearly, something is wrong here. Leaving out the details (I should write a separate article on the Fourier transform to really explain what is going on), the problem is that the information about the object is not homogeneous in frequency space (i.e., after taking the Fourier transform). It might seem strange to think about an image as containing different (spatial) frequencies, but compare this with the frequency contents of sound: The human ear directly perceives frequency information in sounds, and the actual waveform doesn’t mean much to us. For images, this is the other way around, since the human eye detects the brightness of an image, and not the frequency contents. But the frequency contents is there, and, just as for sound, you can go back and forth between the two representations without losing information. 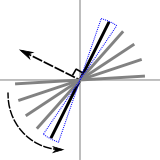 To compensate for the relative lack of high frequencies, low frequencies are attenuated in the projections before backprojection. This is the so-called filtered backprojection. The amount of attenuation follows from the geometry of the frequency space information. Each line in the above figure is taken to represent a wedge (indicated by the blue dotted line). As there is not enough high frequency information to “fill” the wedge at higher frequencies (away from the origin), the data is multiplied with a correction factor. This factor linearly increases from zero in the origin to one for the highest frequencies. This is, of course, an approximation, since the missing high frequency data doesn’t magically appear in this way, but one that can be made as good as needed by increasing the number of projections.

As an example of a somewhat more complicated object, and since I’ve already told you that the Shepp-Logan phantom is used often as a test image in CT, I show its sinogram (180 projections) and reconstruction below. As you can see, for an object of this size (200 by 200 pixels), a reconstruction from 180 projections is quite accurate.

The next article explains how algebraic techniques can be used for tomographic reconstruction. This is where most research (including my own) is situated nowadays.